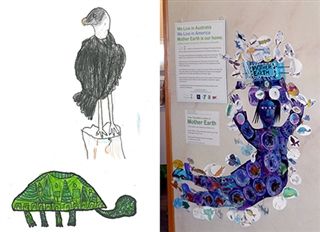 Published 9/4/2014
by Raffi Darrow, Ebytes Editor
As part of their study of the continent of Australia, our 2012 second grade class participated in the Pollyzoom International Exchange with Boorai: The Children’s Art Gallery, located within The University of Melbourne’s Early Learning Centre (ELC). The ELC is a specialized research and demonstration kindergarten, and their Gallery is an enchanting place celebrating the natural creativity of children.
ELC students sent us a beautiful book filled with their illustrations of animals native to Australia. Pollyzoom artist Paula Allen, asked for Shorecrest's help in creating a mural of animals from the United States to share with the ELC in exchange. Shorecrest provided artwork to represent the animals from southeastern United States, with a focus on the tropical creatures of Florida and the Everglades. Children in NY provided artwork with a focus on northern United States.
Student artwork was scanned and sent to Ms. Allen. She incorporated the student artwork along with her own into one piece entitled “We live in Australia, We live in America. Mother Earth is our home”. The piece visited the World Awareness Children's Museum in Glen Falls, NY, and visited Shorecrest during 2012’s Celebrate the Arts week. Then it made its way to Australia.
Although this was originally meant to be a temporary exhibit, we have just been notified that our artwork is now in the permanent collection at the Boorai Children's Gallery in Australia! Jan Deans, Director of ELC and the gallery, was so pleased with the partnership!