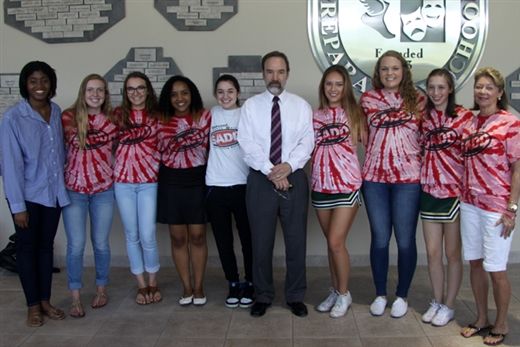 When Mr. Feldman’s 21-year-old daughter, Casey, was killed by a distracted driver in July 2009, he never imagined he would parlay what he describes as “telling a sad story,” into an interactive and impactful presentation that is changing teens’ attitudes and behaviors about distracted driving. Casey, who was crossing the street in a crosswalk in daylight, was struck by an adult, male driver who was reaching for his GPS and rolled through a stop sign. Mr. Feldman, a trial lawyer who earned a master’s degree in counseling after Casey’s death, readily admits that he too was once a distracted driver, answering client emails while on the move.
Distracted driving accidents are completely preventable. What one does while driving is a choice. That's one reason why drivers need to be aware of the consequences of driving while distracted. The best way to make better choices in the future is to create a plan for changed behavior before the next driving opportunity. Mr. Feldman said that he has an app that senses when his car is in motion, and will automatically send out a message via text or voice mail saying that he is driving and it would not be safe for him to answer the phone.
"I hate being told not to do something. If I tell you what you can't do, I want you to raise your hand and say, 'You promised you wouldn't tell us what we can't do.'" he started out with the Upper School students.
EndDD.org (End Distracted Driving) was established to raise awareness and generate action against the epidemic of distracted driving. Teens in our audience said they may be distracted by phones, food, makeup, friends, changing their music and more. Although they were able to laugh at a short video clip about things that aren't illegal to do while driving but still should not be done (such as making bisque or hosting band practice), it helped bring Mr. Feldman's point home.

Audiences also learned that while we think we can multitask, our brain actually shifts focus from one task to the next, and roughly only 2% of our population can truly multitask. In addition, using a phone while driving narrows our visual field of focus - so both our brain and our eyes are not where they should be. Even talking on a phone while hands free can make a driver indistinguishable from one with a .08 blood alcohol level. (You can watch the Mythbusters test on that here.)

According to the Florida DMV, one of the biggest causes of accidents in Florida is distracted drivers. It is a problem for people of all ages – not just teens. That is why the safe driving agreement handed out at the end of the presentation is meant for families. Many students raised their hands when asked if their parents drive while distracted. Students sited examples of parents emailing, texting, eating, drinking coffee and more while driving. In addition, they said that although they told their parents it made them feel unsafe, their parents would stop only momentarily and start bad habits again the next time they were in the car together.
Our SADD Presidents were in the front row of the theatre, learning from everything Mr. Feldman had to share. "I'll change my driving habits now." said co-President, senior Jordan W. "Everyone seemed to pay a lot of attention and participate. Being here today changed views." said co-President, senior Wendy D.

Thanks to corporate sponsors like Power Design there was no cost for the presentation. Learn more at http://www.enddd.org