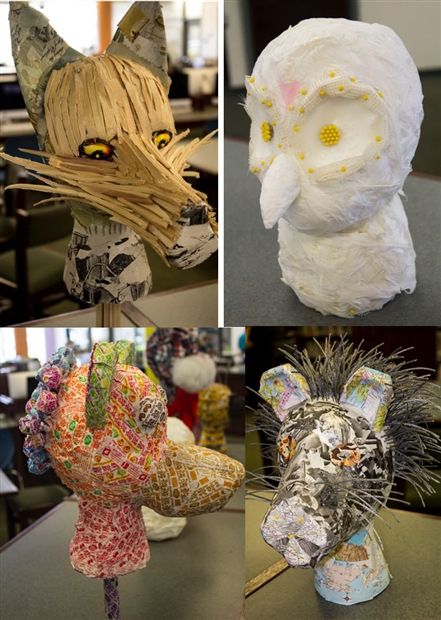 Published 5/25/2016
by Courtney Walker, Media Center Specialist
Zoomorphic sculptures from Mr. Sober's Upper School 3D Design art classes are on display in the Media Center. Please stop by if you get a chance to see these artful animals. They will also be in the library at the beginning of the 2016-2017 school year as inspiration for spin-off projects and collaborations.

zo·o·mor·phic
adjective
For this project, students were challenged to create zoomorphic sculptures out of mixed media and up-cycled books. Unlike working with materials like steel or stone, mixed media often has no inherent value. It is through the application of craftsmanship and creative design that value is added to common materials like coffee bags, clothespins, and old books.

Students were challenged to think about both the form and the surface of their sculptures. As such, they began by sculpting the base of their pieces out of styrofoam with special attention paid to the bone structure and defining features of the animal they chose to represent.

The next phase was the application of the “skin” of the piece. Students found their surfaces from books donated by the library and other material that would be more likely found in the recycling bin than an art store.

For inspiration, the class viewed images of primitive masks from China, Indonesia, Thailand, West Africa and the Americas. Additionally, the class discussed and viewed the work of contemporary artists such as Dolan Gaiman (http://dolangeiman.com/), Anne Lemanski (http://annelemanski.com/home.html), Betsy Youngquist (http://byart.com/), and Little Stag Studios (http://www.littlestagstudio.com/). These artists all create beauty from mundane objects, and their work is celebrated internationally. The exhibit inspired a display of accompanying Anthropomorphic fiction in the Media Center as well.